Last week I spoke at GovBlogCamp, an event for government bloggers. I was the first speaker of the day, and my aim was simple enough: I just wanted to inspire people to be more adventurous with their blogging. To blog like there aren't any rules. Here's the gist of what I said. 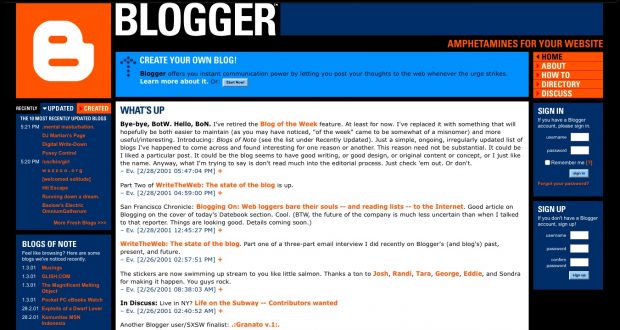 Hands up if you remember this. This is a screenshot of Blogger nabbed from the Wayback Machine, back when blogs were the exciting new thing, when Blogger was cool. This particular front page dates from February 2001, but Blogger was around long before that.

This was before social media, before WordPress, before Facebook. Before Amazon was a big deal. Google existed, but no-one knew what it was going to become. This was when people still sniggered at Mac users. Before most of the internet as we know it today.

You handed over your FTP username and password to them, then used their web interface to add new posts, which got wrapped up in templates they’d provided and you had probably messed with, and the whole lot got pushed over to your server. A security nightmare, by today's standards.

But I used it and I loved it. Lots of people did. Even today, I kind of miss it. (I know it still exists, but that insecure do-all-the-FTP-hard-work-for-me feature died a long time ago.) 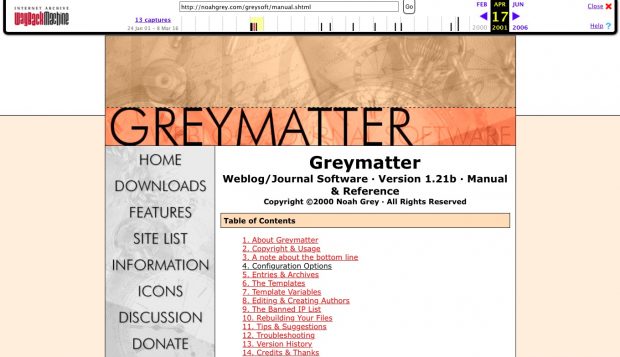 How about this? Hands up if you ever used Greymatter.

Greymatter was the WordPress of its day. In fact, it inspired the early work on the thing that became WordPress. Without Greymatter, the internet might look like a very different place today.

It was easy to use - you downloaded some PHP files, edited some parameters, then uploaded them all to your server. Boom! You had a web interface into which you could add new posts, edit old ones, manage your archives, and so on. Greymatter was way ahead of its time. Noah Grey was kind of a genius. He still is. 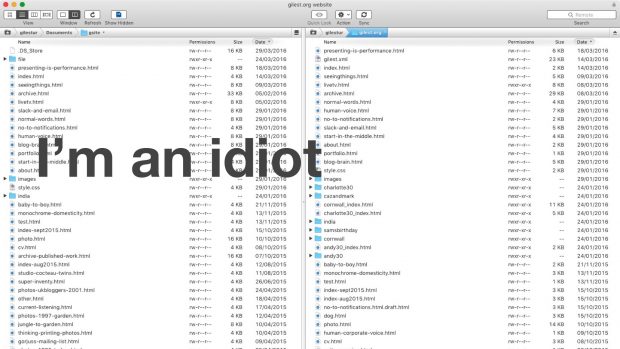 By any reasonable standards, I’m an idiot.

I’m an idiot for many reasons, but the main one is that every time one of these brand new methods of blog editing and managing came along, I switched to it. I was never satisfied with what I had. I always thought the grass would be greener. I can’t remember the order that I tried them all in, but I tried them all: Blogger, Greymatter, Tumblr, Diaryland (aka PITAS), WordPress hosted, WordPress self-hosted, you name it, I tried it.

I turned my blog into a mailing list. For a couple of days, it was a wiki.

I was an idiot because every time I switched from one CMS to another, I had a choice: either import my existing archives of blather (which might be easy or might be very hard), or just ignore them. Start all over again from scratch.

I regret that now, because so much of the stuff I wrote in those years got lost.

While that was all going on, there were some blogs that I particularly loved. 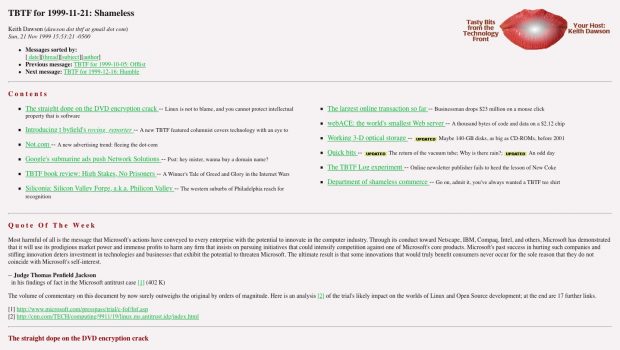 There was this, Tasty Bits from the Technology Front. It didn’t call itself a blog, but I’d argue it was one.

Before technology blogging even existing, Keith Dawson did it single-handed, in an incredibly detailed and well-written weekly summary of what was happening online.

Keith had a very distinctive email sig: “Layer of ash separates morning and evening milk.” I used to look forward to every edition of TBTF. It was proper essential reading. 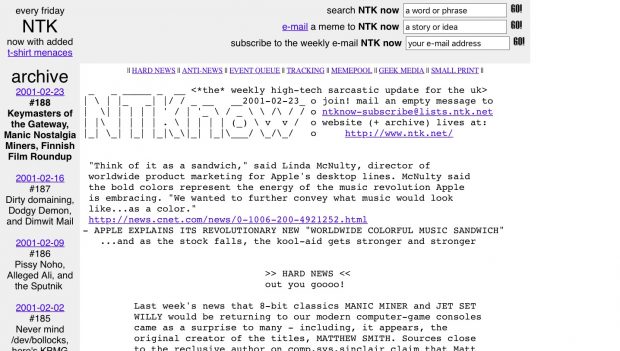 And of course there was NTK, Need to Know. It described itself as “THE high-tech sarcastic update for the UK”

It was funny, it was informative, it was occasionally outrageous. It was brilliant. It wasn’t a blog either, but it sort-of was. If it had started a few years later than it did, it would have been. 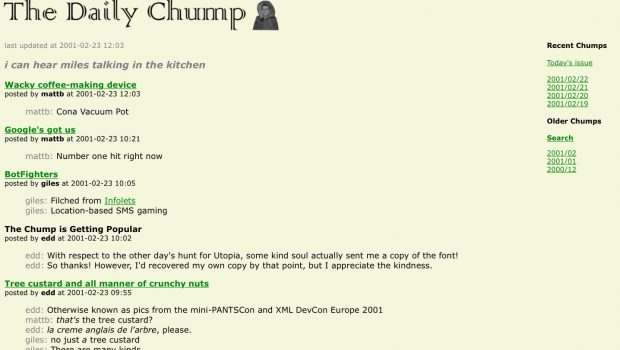 And there was this, The Daily Chump.

That was a blog I was involved in. That’s me at the top of the page, wrapped in a sleeping bag.

The chump was updated from an IRC channel that me and some friends used to hang out on. You could post a link in the channel, and a bot would notice it and post it on this page for you. Anyone in the channel could then add comments. I’ve never had as much fun blogging as when I was part of the Daily Chump.

It was very silly. It was brilliant. I miss those days. 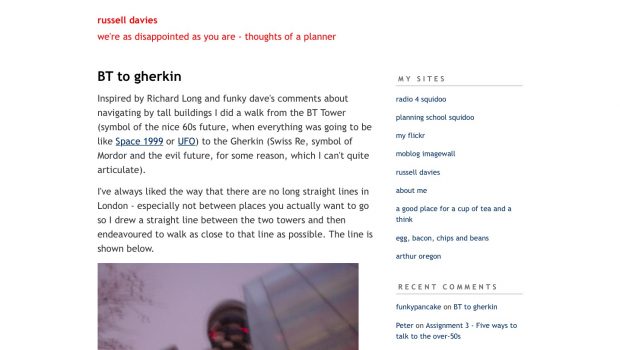 I’m not just saying this because Russell used to be my boss - long before I got to know him, it was clear that he was a terrific blogger. He still is. He understands the medium better than anyone. 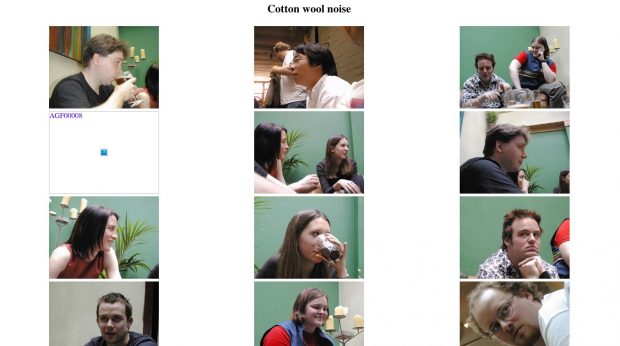 One summer afternoon in the year 2000, a bunch of bloggers in London assembled in a pub behind King’s Cross. Of course no-one had a camera in their phone, because no-one really had a phone, but I did have a camera and I took these pics.

The point is: we were a bunch of very different people, with very different interests. Blogging was what brought us together, not the stuff we blogged about.

The stuff we blogged about was incredibly varied. Some of us posted very personal journals online. Some of us kept it to brief links. Some of us opened up completely, others hid from the world behind pseudonyms and avatars. Some of us wrote for laughs. Some were deadly serious.

It didn’t matter what sort of stuff you were posting. No-one was breaking any rules by being different, because there weren’t any rules to break.

Some years later, I wrote something on my blog, saying: “A weblog is whatever you want it to be.” What sparked that rant was a rash of articles and books and things telling people “how to blog.”

“The web belongs to everybody, so make your piece of it reflect you,” I said.

I still believe that, even now, when blogging is so unfashionable that even governments do it. But 2007-me is so happy that governments are blogging now. 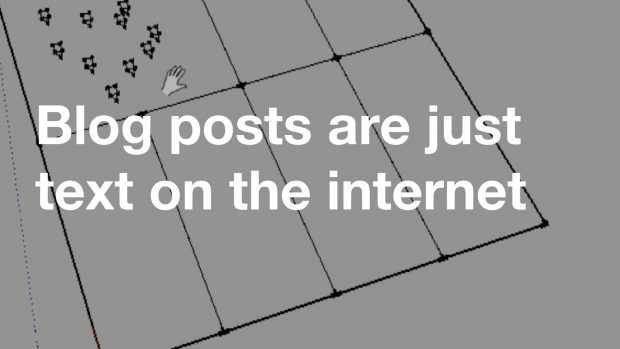 A blog is a very simple thing. Noah Grey could see that when he coded Greymatter. It’s just pages of text on the internet.

That’s why all those faves I mentioned - the Chump, Tasty Bits and so on - were all blogs in my opinion, even if they didn’t look like blogs and they wouldn’t have called themselves blogs.

They were pages of searchable, linkable, Ideally accessible text.

I was strident about how you didn’t need to follow a set of rules someone had made up if you wanted to start a blog. All you had to do was put pages of text on the internet, and you could call it a blog.

It didn’t matter how you did that, or what paraphernalia you surrounded your text with. Hypertexts were the foundation of the web as we know it, and it doesn’t matter that the word “hypertext” has faded from use -- the fact is, today’s web is still, mostly, hypertext.

A single blog post can be anything, can do almost anything. It can tell a single story, or explain a single thought. It can be something people might read because they found a link to it somewhere else on the internet. They might read it, then close the tab and never come back.

But then, the same blog post can be part of a wider ongoing narrative. Part of your corporate story. Your brain, over time, on the internet. 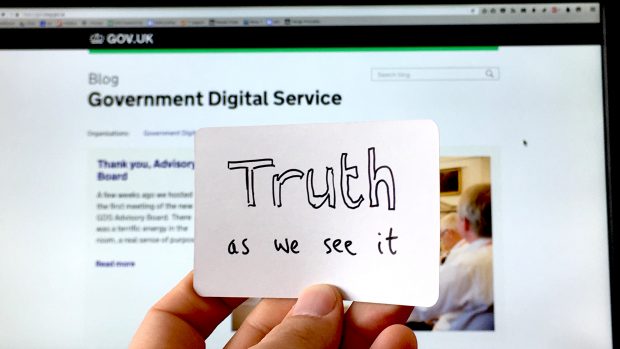 Every page is a moment of truth-as-we-see-it, at that moment.

A single post is the truth as your organisation sees it, at that moment in time. Another post, published on another day, can be a slightly different truth. 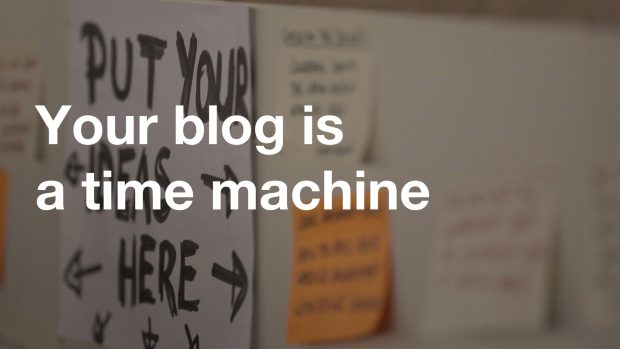 A blog is a time machine. The narrative it tells matters to the people you need to influence, and to the people who need to understand your work.

It also matters to your own staff. The people you employ now, and the ones who will join you in the future. If your blog is your brain, it’s also your memory. It’s a record. A library. An archive. Over time, it becomes a repository of knowledge.

The future can link to the past, and see what the past was thinking. The past can have links to the future, to show how thoughts changed with the benefit of hindsight. (It’s ok to responsibly edit old posts, especially if you’re adding links to the future.)

It’s an evolving hypertext of thought. The more you use it, the more valuable and powerful it becomes. 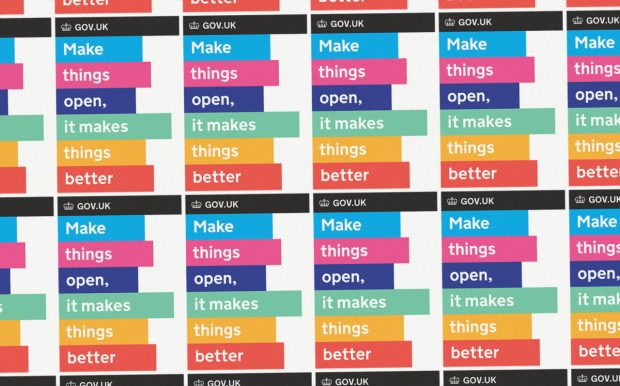 Hopefully you’re all familiar with our list of Design Principles. This is my favourite, number 10: Make things open, it makes them better.

The more open you are on your blog, the better a brain it becomes. If you’re open about what’s changing in your organisation -- if you blog about mistakes, if you blog about the new and link back to the old while you’re doing it -- then in my opinion you’re doing this. You’re making things more open, and that makes them better.

Nothing is more human than changing your mind.

It’s ok for your blog to say one thing one day, and something contradictory another day. Your blog becomes evidence that your organisation can actually think. That it can change and adapt.

Here's a list of things I think it's ok to use your blog for:

That's it. I just wanted to come along and say that out loud. I just want to encourage everyone to blog like there aren't any rules.

Because there aren't any rules.